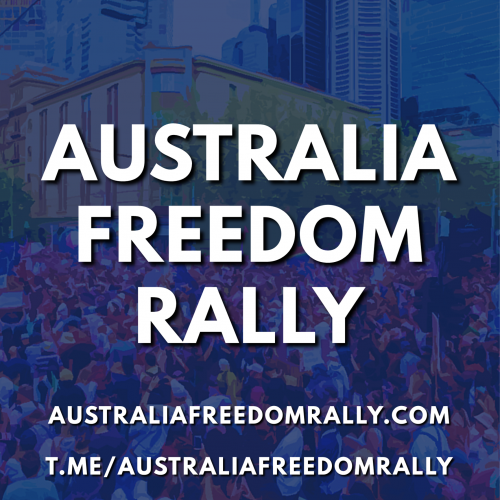 Australia Freedom Rally is a community of Libertarian and Populist Activists.

We are dedicated to preserving the Freedom of all Australians by advocating for policy changes and action at the Federal, State, and Local level.

Australia Freedom Rally is a national Network of organizing groups, that form the backbone of the organizing team of the World Wide Rally for Freedom in Australia.

Australia Freedom Rally is a member organization of the World Wide Demonstration team, which coordinates the World Wide Rally for Freedom Internationally.

We support and implement the World Wide Demonstration Platform in Australia.

1. Build Community Support for the Principles of Freedom:

Create and nurture grass roots support for individual and economic Freedom, for reducing the size and scope of Government, and for an expansion of Human Rights Protections in Australia. Protect Freedom of Speech, Freedom of Movement, Freedom of Assembly, Freedom of Choice, and Freedom of Health.

3. Build Community Support for an Australian Bill of Rights:

Draft and legislate an Australian Bill of Rights to enshrine Human Rights protections into law that supersedes both Federal and State law, and cannot be legally violated by State Governments under States of Emergency, by way of a referendum to amend the Australian Constitution.

Create an environment where the Pro-Freedom community can be united, join in participatory experiences, develop social ties, and networked relationships.

Promote the establishment of Pro-Freedom Institutions for generating consensus over human actions at scale, in order to provide bases of legitimacy from which the values of Freedom can be protected and promoted in public discourse. Support the production and distribution of creative media such as videos, music, art, movies, and news that promotes the principles of Freedom to a wider audience, and infuses our values in culture.

Create and pass legislation that prohibits the use of lockdowns, as public health policy, including but not limited to individual movement distance limitations, business closures, or specification of acceptable reasons to leave home.

Create and pass legislation to prohibit the use of mask mandates as public health policy.

Enable international and domestic flights and travel without any quarantine requirements, travel restrictions, or border closures that did not exist prior to January 2020.

10. End all State of Emergency Declarations:

Deactivate all State of Emergency declarations that exist in response to Coronavirus and rescind all additional executive emergency powers that are being used by governments to implement the abovementioned totalitarian population control restrictions. Repeal all legislation used to embed State of Emergency style executive discretionary pandemic based powers into parliamentary law. Reduce the scope of powers available under State of Emergency laws, increase the level of oversight required for them to be exercised, and limit their application time frames.

Australia Freedom Rally is committed to fighting for the accomplishment of all of these goals, which we believe are credible, reasonable, and actionable.

We encourage every Australian Member of Parliament to express support for these demands, and we will congratulate all that choose to do so.

We hope that these action items can guide the discourse of our recovery, begin to restore public confidence in the Institutions of Government and Medicine, and ensure that this can never happen again.

This is off canvas menu widget area. To enable it add some widgets into Appearance – Widgets – Menu Section, and go to Customizer – Main menu to set the icon position.